Known for a good party and networking opportunity, ROOF on theWit (@theWitChicago) is the definition of work hard and play hard. Chicago professionals are known to flock to ROOF on theWit for happy hour relaxation and networking events. Starting May 13, ROOF on theWit is hosting Summer Fridays, a summer happy hour series. It doesn’t hurt that this rooftop bar and lounge is on the 27th floor of the beautiful theWit Hotel, with an expansive view of the Loop and beyond.

With a tagline of “Mix it up. After work.” and a special after-work menu available from 4pm to 7pm on weekdays, Vertigo Sky Lounge (@VertigoLounge) has become the go-to rooftop bar for Chicago professional to network and unwind. Vertigo Sky Lounge hosted a successful networking event with Network & Social last month and the lounge’s calendar is sure to fill up with similar events soon, as this spot is known for its networking parties. 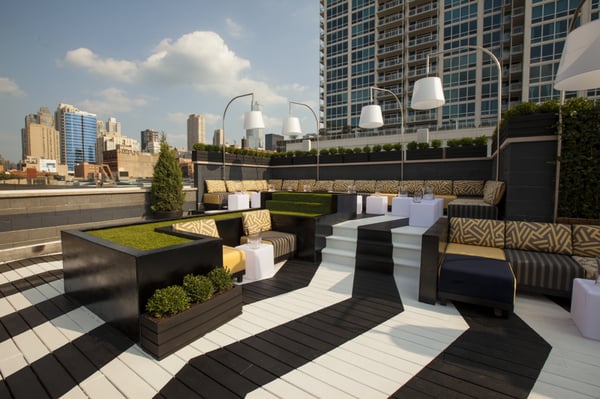 The Kensington Roof Garden and Lounge

The newest addition to hot networking spots in Chicago is The Kensington Roof Garden and Lounge (@parliament_chi), which has just opened atop Parliament, an exclusive bar that opened in August 2013. With its secret ally entrance and manicured rooftop lawns, The Kensington’s aura of luxury sets the perfect stage for business cocktails. On May 6, Linked ’N Chicago is organizing Linked ‘N Chicago LIVE at Parliament, a networking event at The Kensington. This is sure to become a staple professional mingling rooftop in the city this summer.

A mix of classic and contemporary style, the Drumbar (@DrumbarChi) rooftop bar in the Raffaello Hotel offers eclectic cocktails, a spectacular view of Lake Michigan and downtown Chicago from the Gold Coast, and access to the city’s top professionals. Follow this lounge’s calendar because Drumbar frequently hosts special networking events for specific industries and for Chicago’s young professionals as a whole.

Located on the mezzanine level of the Trump International Hotel & Tower in River North, Rebar (@TrumpChicago) is a sophisticated staple in the Chicago professional’s networking diet. Although not offering happy hour discount drinks, Rebar is a popular after-work drink spot for the suited workforce of the Loop, making it a great place to meet and mingle. With $19 cocktails and the Trump Hotel’s sophisticated reputation, you’re likely to get a successful crowd that enjoys the finer things.